This series is set up to compliment my video series from 2016, “Starting My Own HVAC Company.”  I  thought I’d review some of the things I talked about before and give you my thoughts on them now that I’ve been doing it for a while.

When I was starting my HVAC business, I didn’t realize how much I would need to know.  I was just another technician who was tired of working for someone who didn’t have the same values and ideas I did.  Some people don’t think the journey should be too hard.  Get a truck, get your tools, get some customers, and go to work.

It was a liberating feeling for me, at first.  I quickly found out if I wanted to grow my business, I would have to learn more about the business side of HVAC.  I knew I was a good technician. But I started developing a great desire for more input, more knowledge of the business side.

Getting off the ground seems like the toughest part of the process, but I can honestly say now, that it’s not.

This series is set up to compliment the 2016 video series, “Starting My Own HVAC Company.”  I  thought I’d review some of the things I talked about before and give you my thoughts on them now that I’ve been doing it for a while.  If you want to see that series before reading this post, you can find it here.

Get a Contractors License

The first thing we should talk about is, if you want to this right, you’re going to have to get your contractors license.

In California, if you want to do any HVAC, plumbing, electrical, handyman, and other types of work for someone and you plan on collecting more than $500, you need to get your contractors license first.  Why?  Let me give you a few reasons.

Second, having a license lends credibility to your name and builds trust.  When your future customers see you’re legitimate on the government website, it shows people you’ve gone through the process like everyone else, and you don’t cut corners. You can control your own business and its reputation when you’re doing things the right way.

Third, contracting legitimately keeps the quality of work you do at a certain standard.  For any work that alters the electrical, plumbing, gas lines, or structure of the building, a permit is needed.  To get that permit, a contractor’s license is needed.  And when you’re done with that work, a local city or county building inspector comes in and verifies your work to close out the permit.

You’ve heard me talk (and complain) about the system of inspectors and administrative personnel in the building departments.  Even though I feel the way I do about them, I realize the need for inspectors to confirm the work we’ve done.  It’s a system of checks and balances which provides a separate set of eyes to see the job we did and give the homeowner their seal of approval based on the local building codes.

Finally, being a part of a group of people in your field who has gone through the steps of becoming contractors creates a force that inhibits non-licensed people from scamming and taking advantage of homeowners and endangering their property with shoddy workmanship (which still happens anyway.)

I wanted to review these steps again, not to discourage anyone, but to enlighten those of you who are interested in starting up your own company.  Start by being legit.  I don’t condone the people out there doing side work while still working for someone else.  But that’s another topic.  If your state allows for high dollar HVAC work and there’s no insurance requirement or state bond obligation to protect the homeowner, should you burn their house down with sloppy, unvalidated workmanship, then more power to you.

Take the time to do it right from the start, no matter what state you’re in.

Thanks so much for stopping by, and we’ll see you on the next blog.

Don’t Miss our Video and the Series on This Topic: 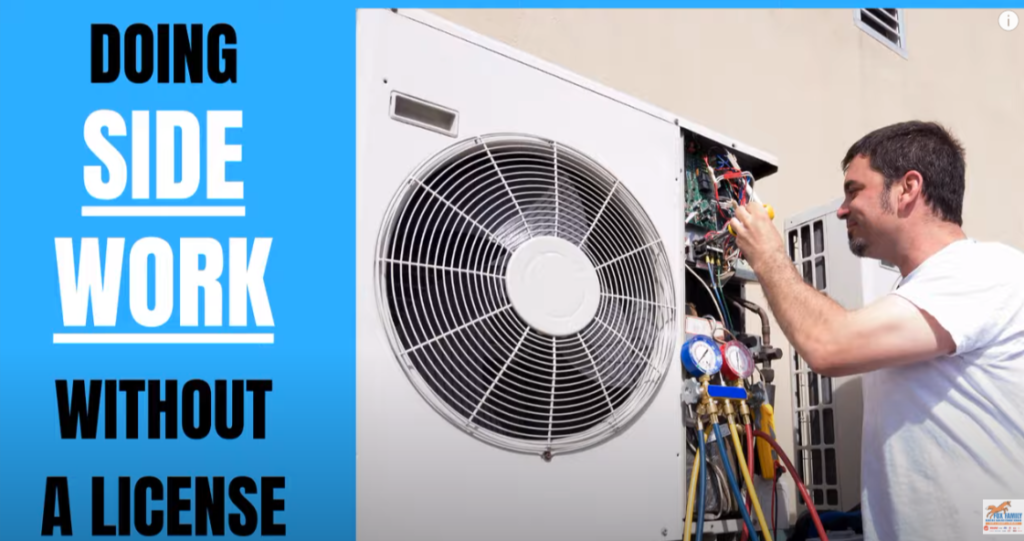 Relocating Your Thermostat Might Make Your Home More Comfortable